Annie Bortnick: from France to Chestnut Hill, with love 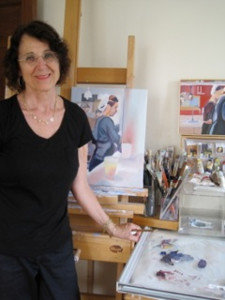 Annie Bortnick, 68, is a painter and teacher who has lived in Chestnut Hill for the past 36 years but who has very fond memories of her childhood in the Auvergne region of Central France, where volcanoes like Puy de Dôme sometimes host the finish line in the famed Tour de France bicycling competition. She attended Blaise Pascal University in Clermont Ferrand, capital of the Auvergne region, not far from where her family lived.

She first discovered her gift as a visual artist at a young age while experimenting with charcoal and pencil drawings. Her pieces earned her accolades and many first place prizes in school. Her family, including three sisters, were also artistically inclined. “Everyone in my family enjoys works of art, including my mother, who throughout her life created remarkable decorative crochet pieces.”

But it wasn’t until later in life that Annie took up painting, which would eventually help define her career. “I began painting later on inspired by my uncle’s landscapes of Provence and encouraged by my nephew, who attended École des Beaux Arts in Paris.” (Provence is a beautiful region of southeastern France, where artists come from many countries to paint, and École des Beaux Arts is a famous art school.)

Annie’s family had artistic displays in the Museum of Cutlery in Thiers, France, which also inspired her. Both her grandfather and great grandfather have artwork crafted in ivory, precious stones, pearls and much more displayed in the museum. “[The artwork] they carved was manufactured in factories they owned. Like them, it is the craftsmanship of drawing and painting that interests me. We interpret and transform objects, bringing personal visions to them.”

Eventually, Annie began teaching philosophy to high school students in France and preparing them for the Baccalaureate exam, a requirement for students planning to attend universities in the country. However, she and her American husband began searching for career opportunities in the U.S. and moved here in 1975. She wound up teaching courses in History of the Arts in Western Civilization at the Performing Arts High School in center city for 15 years as well as the Lionville Middle School for the Downingtown Area School District for 22 years.

Her husband, Karl Bortnick, worked for the city of Philadelphia for 31 years but is currently a technology consultant in both the private and non-profit sectors. She also has two daughters, Anna, an assistant professor of cardiology and surgery in New York City; and Alexandra, a post-doctoral fellow in immunology at the University of California San Diego.

Despite her teaching career taking up so much of her time, Bortnick has had exhibits of her paintings all over Philadelphia. Her first few exhibits were hosted by Geechee Girl Rice Cafe and High Point Café, both in Mt. Airy. She often presents new pieces at the Good Karma Cafe at 22nd and Pine Streets.

Annie’s work is crafted primarily with oil paint. She believes the slow-drying paint has a certain flow and texture not found in other types of paint. As for what she enjoys painting, it’s quite diverse. “I love painting landscapes, portraits and animals. For landscapes, I like Cape Cod, whose light reminds me of landscapes I painted in the south of France. For portraits, I do my family and friends. For animals, I paint my two cats, my neighbor’s dogs as well as my daughter’s Great Dane.”

Annie feels like she is part of a community of artists who love working with colors, contracts, forms, perspectives and shapes, and she identifies with people who appreciate the nuances of art. “In art, people escape time and play, while enjoying creative challenges.”

Bortnick currently has an exhibit of her work that began July 26 and will continue until the end of September at the new Good Karma Café, 2319 Walnut St. Included in the exhibit are paintings of scenes from the Reading Terminal Market featuring young Mennonites cooking and baking various foods.

To learn more about Annie’s art and to see her work, visit www.anniebortnick.com or abortnick.blogspot.com.

Copyright 2023 Designed and Developed by TeslaThemes, Supported by WPmatic